In 2008 the company H.Hol en Zoon started to developed its first own orchard sprayer. This after many years of experience with selling and servicing Douven and John Deere orchard sprayers.

The unique H.S.S. Controlbox® makes it possible to constantly meet the requirements for drift limitation up to a max of 99% drift reduction. 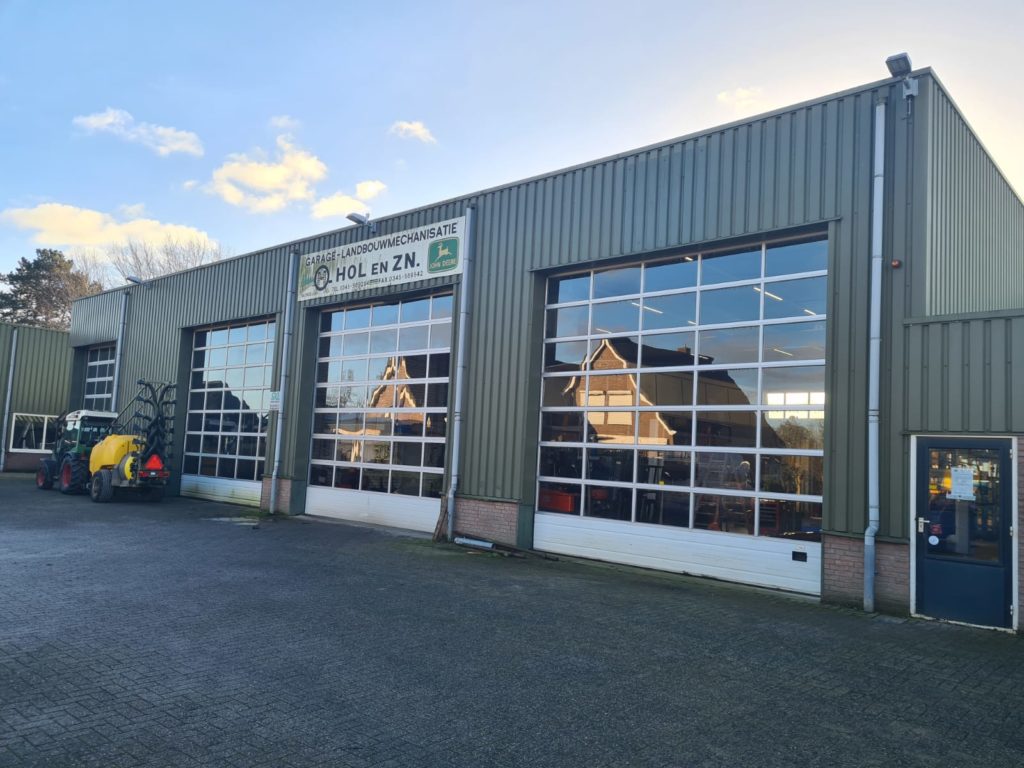 The first machines were produced and delivered in this year. The name Hol Spraying Systems® was born. H.S.S. has been an independent company for the production of crop protection machines from that moment on. In this phase, H.S.S. only sold single row orchard sprayers. 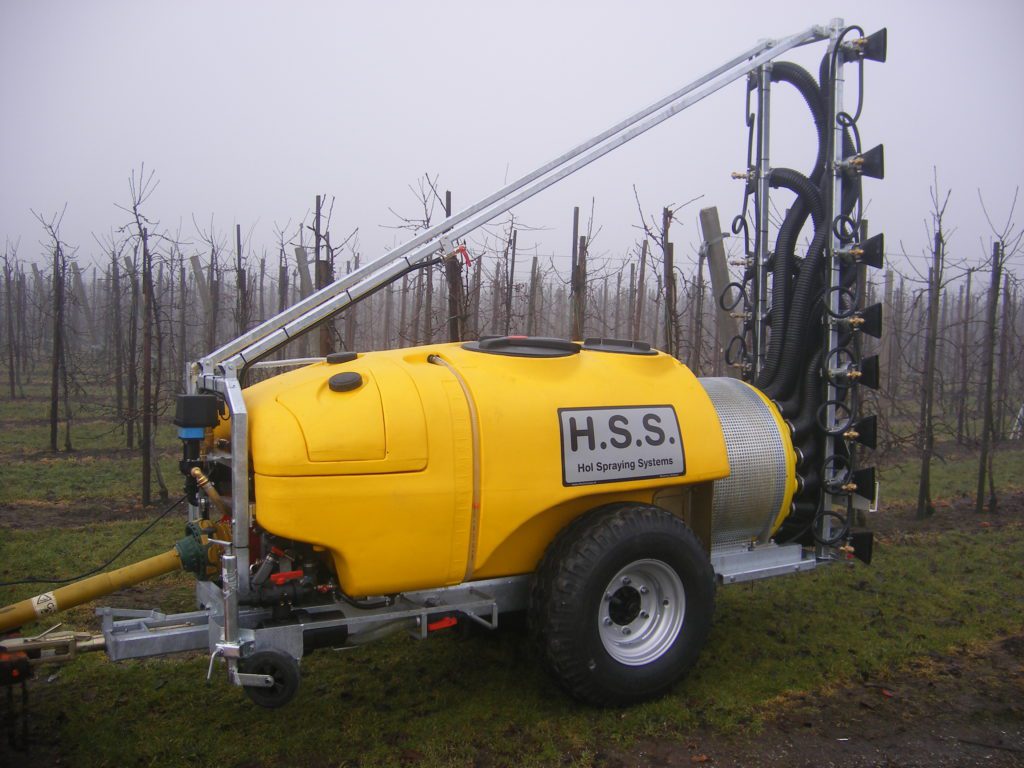 To promote ease of use, H.S.S. has also developed its own operating software. Because existing control systems are not fully compatible with the fruit growing sector, H.S.S. started with its own Controlbox®. Because the H.S.S. Controlbox® is specially made for fruit growing, the operation is effective, clear and insightful. The first Controlbox® was delivered in 2013. From this year on, the development of the Controlbox® has never stopped, various changes have been made to make it even easier to use. The first and only major update was implemented in 2018. 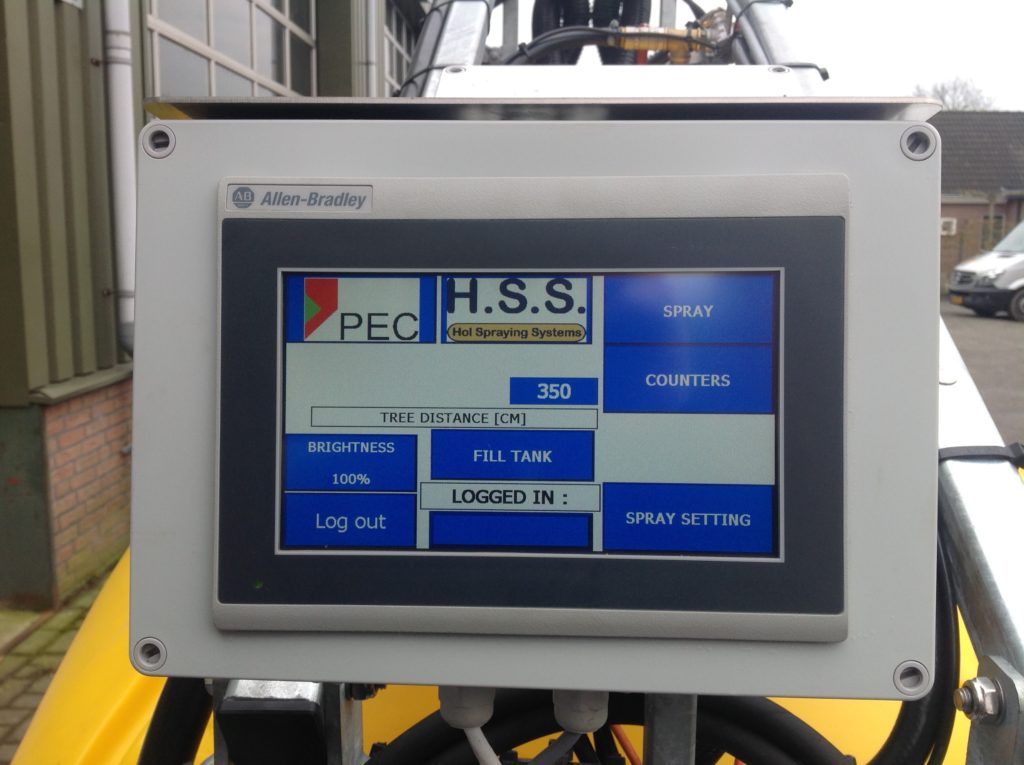 The first three-row orchard sprayers were delivered in this year. These machines were sold to fruit growers near the company and are still working to this day on. 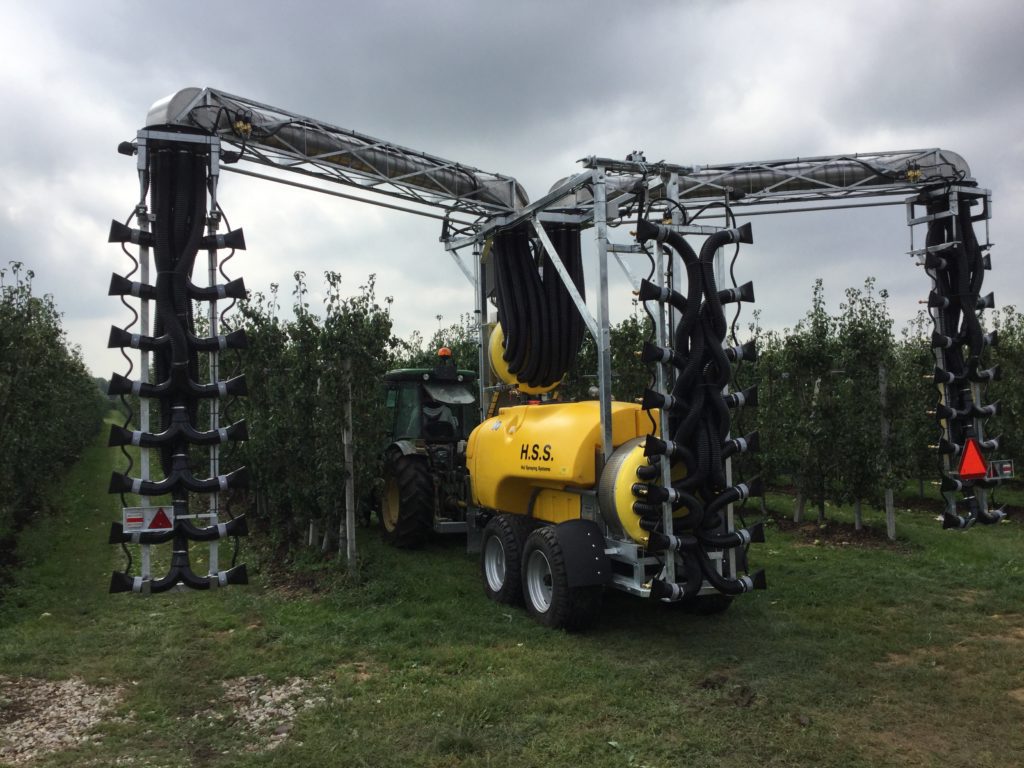 In addition to the production of orchard sprayers, the development and delivery of the ‘Weedy®’ weed sprayer line was started in 2015. There are also several practical options to meet the specific wishes of the fruit growers. For example, a Weedy AA can be chosen, mounted at the front of the tractor with a mounted WS3P tank at the rear. Or a Weedy CC which hangs at the back of the tractor with a trailed WS1500 behind it.

The first strip cleaners were also developed and delivered in this year. 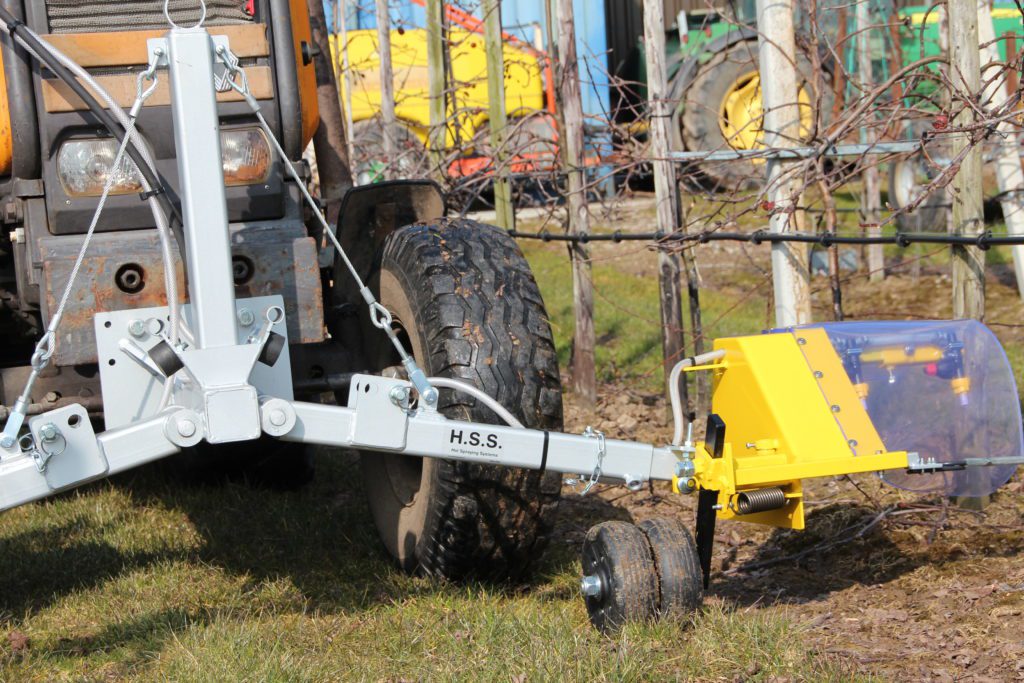 Because the company is growing rapidly, it was necessary to think about expanding the production area. In 2018, plans were put on the table to construct a new building in Geldermalsen.

In 2018, the development of the H.S.S. Intelligent Spray Application (ISA) started. By mounting sensors that release liquid based on the presence of chlorophyll, H.S.S. provides a piece of high-quality technology. The fruit grower thus gains insight into a lot of information about his orchard and saves considerably on crop protection products. 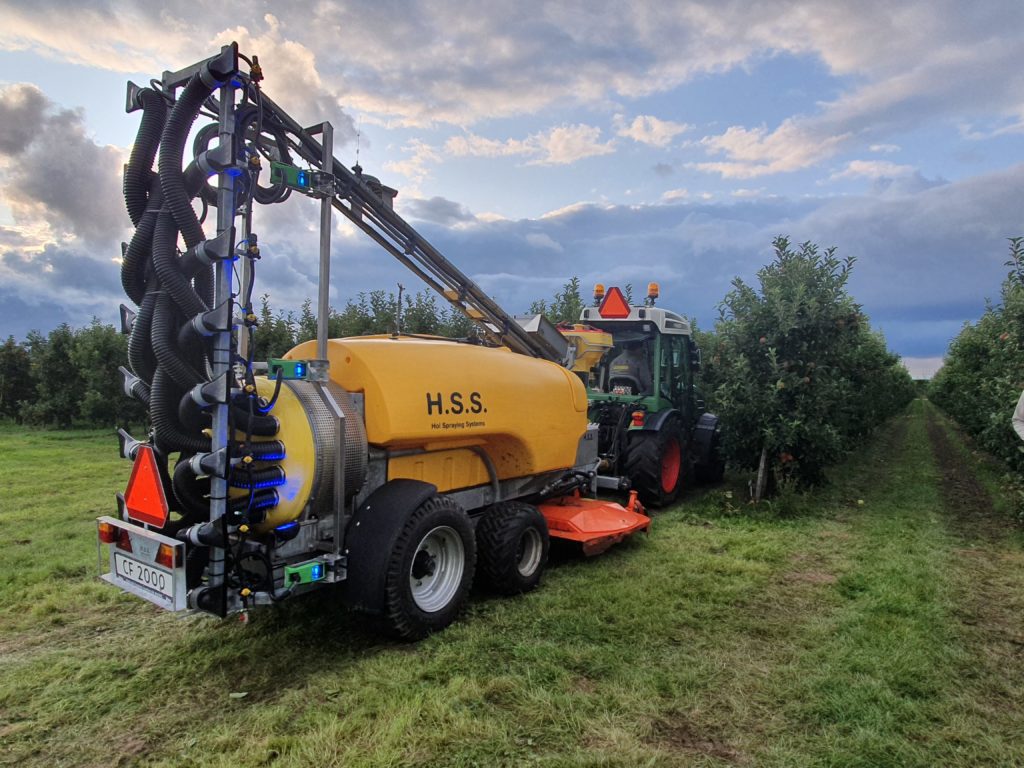 After the first pile of the new building was driven in June 2019, the building was taken into use after a beautiful opening in January 2020. Ample storage facilities, a fully equipped workshop and a test room ensure that H.S.S. has plenty of room to grow and further professionalise. 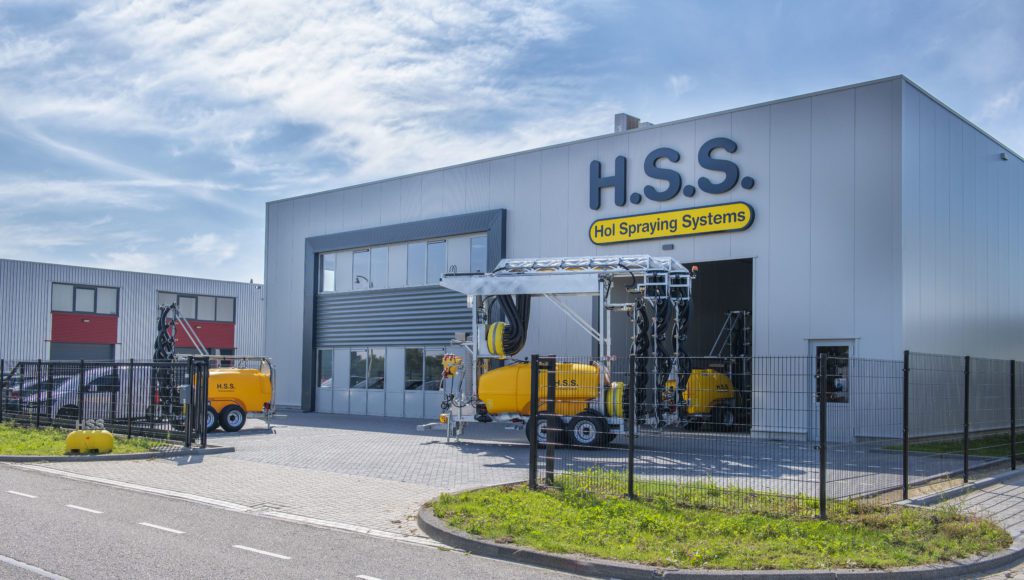 The focus is increasingly on the future of crop protection. For example, ISA, GPS and links with external programs are constantly being improved and there is even a fully autonomous machine on its way that can take over a lot of work. This is how H.S.S. continues to look to a future full of quality. 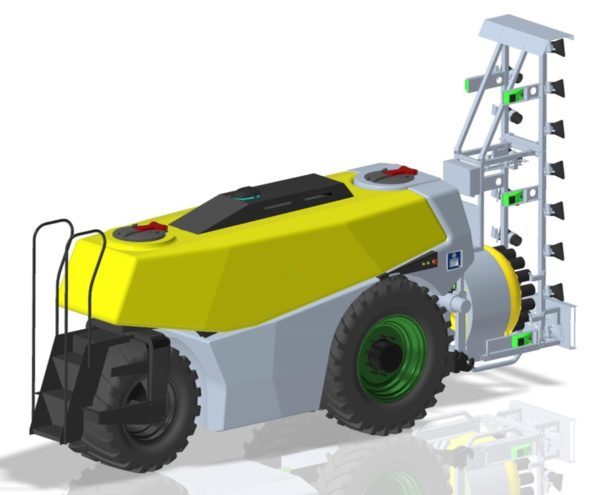 Curious about one of our products? Make an appointment here.